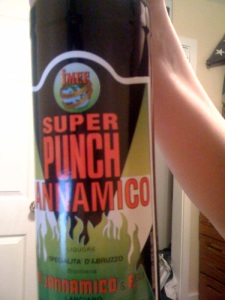 Dr. Bamboo and Tucker did a “regional booze swap” a while back. The point was to send each other bottles of alcohol that are rarely sold outside their geographic areas. The TTBBR team sent out a bottle of Newfoundland Screech and a bottle of General John Stark Vodka. In response, we received a bottle of something called Super Punch Jannamico.

We knew only three things before embarking on our drinking adventure.

1. It is called Super Punch Jannamico, which sounds more like the name of a Street Fighter character than an imported Italian liqueur.

2. It is not supposed to be very good.

3. Old Italian guys drink this once a year on Christmas.

You know what? I think that’s all you need to know. Oh, also that this episode is a musical extravaganza. Here’s Episode 11:

This entry was posted in Uncategorized. Bookmark the permalink.